Early this morning, at 6 am to be exact, I had to drag myself out of bed, take a shower and ruuuuun. I was aiming to be at the School of Art at 7.10 am, I only came three minutes late (this time). Luciana and I were so lucky to get a ride with Paul Croft, one of our teachers, to Wrexham where he and four other artists gave speeches about printmaking residencies and international projects at the Coleg Cambria.

It takes two and a half hour to drive from Aberystwyth to Wrexham, so it was really nice being served fresh hot coffee/tea at the arrival. 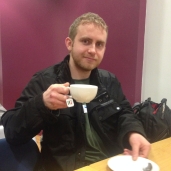 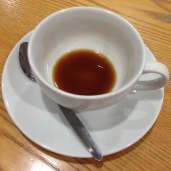 The symposium started with an introduction and continued with the first artist talk held by Katherine Jones. She spoke about her prints, influences and the different residencies she had taken part in. After they talk we could see her prints that she had brought in, and they were really lovely!

The next thing on the agenda was a guided tour to the printmaking studio of the college, used by the students and also the members of the Regional Print Centre. It looked like a good workplace, big enough for a number of artists to work at the same time. The tour was followed by a tasty lunch prepared by the Catering students of the college.

The second talk, Common Ground, were held by the three artists: Greg Fuller, Jason Hicklin and Tracy Hill. They talked about collaboration in their walking art project, their art practises and the three weeks they spent in Australia.

After a small coffee and tea break it was time for the third and last speech of the day, held by Croft. He told about his experiences in China, his exhibitions, collaborations, teaching and a huge portfolio project including artists from all over the world.

Thank you for an engaging, inspiring and fun day!

Links to the artists’ webpages and the Regional Print Centre: